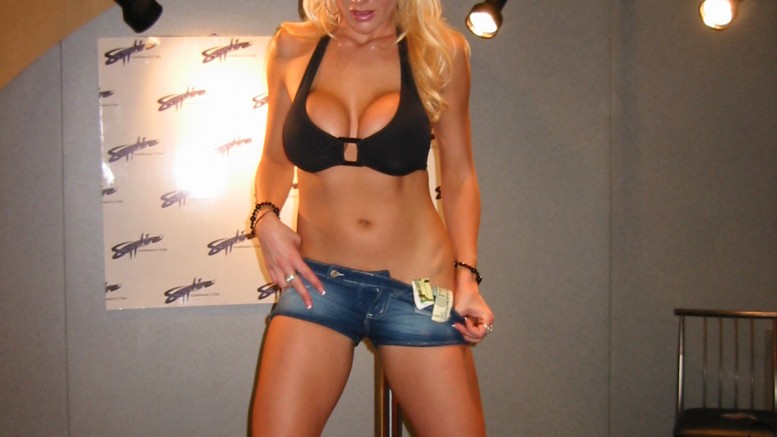 As promised, it’s not going to be all WSOP reporting. Let’s see what’s going on at the “Gaming Life Expo.”

To demonstrate that this expo isn’t all about gaming, and they have indeed added girls to the roster, Saphire Gentlemen’s Club had Lexi (shown here) dancing on a micro-stage. Another dancer named Summer was giving away 2-for-1 drink passes.

At the same booth, the more exciting news is G4’s Layla Kayleigh (she does the “Feed” on “Attack of the Show”) is the new World Poker Tour hostess for 2008.  She’s a hottie with a British accent, and very possibly lesbian or bi. Nice. Don’t want to start rumors but I’ve been around the block and I know these things. Well, okay, I’m just making it up but one can dream. With heels, she must be about 5′ 4″ at the most. A real spinner.

There were more than one booth with computerized poker tables. Hollywood Park, and now Hustler have these but I’m not sure they are talking off yet. I have to think that the casinos would love to have them because it would eliminate the dealers, which must be a large part of their overhead. One company custom makes them for the home. I was too scared to ask for the price. No way I could afford one.

There were a bunch of booths giving away poker magazines, selling books, posters, seats, pillows, and of course, playing cards, poker chips and on and on. The only mild standout was a poker dealer button that has a built in tournament timer with an LCD on it for only $15.95.  I just use my laptop but I guess if you don’t have a watch with a timer, or don’t have a laptop, this might be for you.

The only thing that I actually bought with real hard earned (or poker playing) money was this “Hold’em Shades” (see picture) from bestpokerstuff.com.  No, it’s not sunglasses.  It’s a pair of poker glasses. There is no dark shading, just flash mirror coating. I tried them out and it’s what I’ve been looking for and never found. Also, the side is thick so the guy sitting next to you can’t see your eyes either. I think I’ll use this at the WSOP main event final table.

Be the first to comment on "Gaming Life Expo 2007"