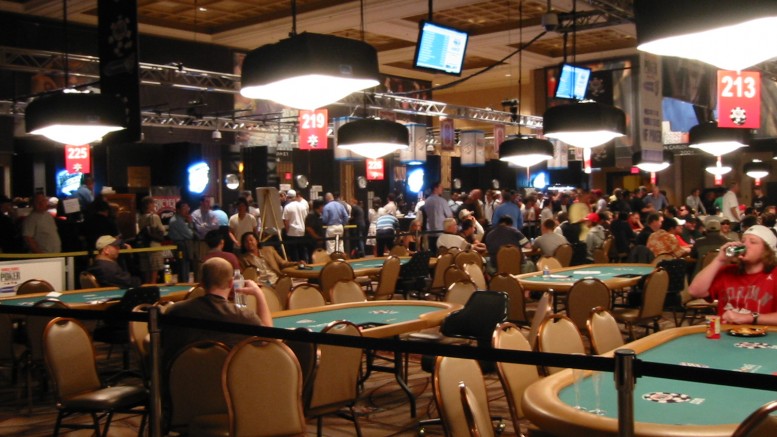 For some reason, I couldn’t sleep very well and got up before the wake-up call. As per usual, I had pre-ordered my breakfast and dinner.

Went downstairs and took my seat at the table. Luckily, there were no pros, and it looked like a relatively safe and friendly table. There were 3 people with 200,000+ chips and all the others were about the same as me at 66,400, or less.

We start with round 11 because there’s like 30 minutes of it left, but continue right into round 12 without a break.

I’m doing my usual thing and building up my stack slowly.  At exactly 1:14pm, a tight older lady goes all in for almost 31,000. I look down and see pocket Jacks. Earlier in the tournament, I would let this go without thinking, but now, I’m feeling like I need to build up my chips. But it’s super marginal because what could she be pushing with? The best I could hope for would be A-K. I think she’s too tight to push with middle pairs. After some thought, I finally call and get the bad news. She’s got pocket Queens.

So that was my second big mistake of the tournament. This one was much worse than the first. Everybody else at the table knew she had Queens or better. What a disaster. I don’t suck out and lose almost half of my chips. Now I’m in trouble.

Shortly after the mind fart, I wake up with A-K offsuit. The blinds are 1,200 – 2,400 and I raise to 9,000.  The second tightest player at the table goes all in on the button. I’m still on semi-tilt from the bad call and decide to fold.  The player thinks he’s doing me a favor by showing me his suited A-K.  I was now officially on tilt and feeling very confused. After the Jacks, I should have taken a walk but I was so low on chips, I kept playing. Now it’s even lower.

The lesson here is, you can’t be making these types of mistakes in a tournament like this.  You really can’t make any mistakes.  Getting sucked out is out of your control, but you can make the right decisions.  I didn’t and I paid the price.

They make an announcement right before the end of the round that we will be playing hand-for-hand the next round.  They do this because when the tournament is at the point where they will start to pay the people being knocked out, they have to make sure that they get the order properly so that there is no dispute about who got knocked out first.  So, they make all the tables play only one hand and stop until all the tables have finished that hand.

This makes play go very slow. Normally, one hand would take anywhere from one minute to 5 minutes, but in this mode, it can take as long as the slowest table, which could be 10 or more minutes.

If the tables were all computerized and networked, they would not have this problem since the computers would know exactly when each player got knocked out of the tournament, down to the microsecond.  But we’ll leave that rant for another day.

As I’m in deep thought, I see Sylvester, the Irish guy from my very first table. He asks me how I’m doing and I tell him. He tells me that I don’t have enough chips and I need to go all-in but not to go all-in with any Ace.  His theory is that only an Ace with a better kicker will call so your chances are better with suited connectors.  He says that because there are 3 guys with 200,000+ chips, it’s likely that I will get called with any ace and any pair.

I thank him for his advice and start thinking more about my strategy.  If I go any lower with my chips, it will get progressively easier for somebody to call me.  At 7 times the big blind, I can still try to get people off their hand. If I fall to 4 or 5 times, somebody will call with almost anything.  I decide that I have to take Sylvester’s advice and go all-in.  I decide in my mind that I will do this on the very first hand back from the break, before anybody figures out what I’m doing.  I’m going to go all-in, no matter what hand I have.

The break ends and I return to my seat.  Round 13 starts.

I’m starting to get a little nervous about what I’m about to do. But I’ve already made up my mind.  While we wait for the start, everyone at the table is trying to convince everyone else not to do anything crazy.  The guy across from me tells me to just sit tight and we’ll be in the money in just 10 hands.  In fact, he and the dealer make a bet with one of the other guys $5 that it will be 10 hands or less.

The more they try to convince me to not do anything stupid, the more I think that I need to go all-in as per my plan.  If everybody thinks I won’t do something crazy, the more likely they’ll think I have a big hand.  I say, “You’re right. I’m only playing with aces. Nothing else.”

With that little seed planted in their minds, we start and the cards are dealt.  When it’s my turn, I look down and see 8 – 9

.  Suited connectors, just like Sylvester recommended.  Nice. I feel a little better about going all-in for my tournament life, with just 10 more people to go before cashing.

“I’m all-in,” I declare. I put my newly purchased holdem’ shades on and wait quietly. Everyone folds fairly quickly.  They all seem to think that I have a monster after our little talk.

“I finally got a big hand. Perfect time for it.”  Maybe I shouldn’t have said anything, but nobody seems to think anything is up.

The very next hand, I wake up with A – Q

.  I do a little Hollywood to sell that I can’t even believe that I got yet another big hand.  I go all-in again. Two times in a row.

This time, people are not folding right away. The tight lady that had the Queens earlier gives me the “I think you’re full of sh*t, but I can’t call” look, and folds.  It goes fairly quickly until it gets to the small blind. This guy is very tight so when he started to think, I thought I might be in trouble.  After thinking about it, he folds and I show my A – Q to try to quelch the restless natives from attacking me on the next hand.  However, the guy says he had pocket Jacks but didn’t want to get involved.

Wow.  Close call.  Now, I need a real hand before going all-in again. The big stacks will probably call next time.  But stealing the blinds gives me 8,100 each time so now, I’m up to 42,200 in just 2 hands.  I’m no longer the short stack at the table.

Now, I’m the big blind. People are playing so tight, it’s folded all the way around to the small blind who properly goes all-in. He knows that if he didn’t do that, I would.  I release my hand.

Next, I’m the small blind but I’m not able to do the same trick because one of the big stacks finally comes in for a raise.  Probably to punish me for the all-ins earlier.

After the first 2 hands, 2 players were knocked out but now, after the 3rd hand, nobody is knocked out.  Instead, the small stacks going all-in win and double up.

As play continues, I now wait for a real hand because I have a little more time to wait now. As I thought, after 10 hands, we still have 624 players and 3 more must be eliminated and play continues.  If I had not stolen those blinds, I would be in serious trouble right now.

Finally, after 15 hands, we start to hear people clapping, then cheering, then shouting. The noise gets louder and louder.  Then, the official announcement comes over the loud speaker. “Congratulations! You have made the money.” The bubble boy (the last one out before the money) is eliminated and everybody claps for this poor soul.

Well, I did it.  I cashed in my first WSOP tournament.  I felt like I had caught the winning touchdown in a big game.

The rest of the tournament is anti-climactic so I’ll just report that I went all-in with A – Q against pocket Kings and lost to an overkill set of Kings.

I was escorted by a WSOP runner to another room, where I filled out a bunch of papers and got paid.

Overall, I enjoyed the experience. It was fun but hard at times and certainly a learning experience. I saw moves that I have not seen in smaller tournaments. I saw how the pro players play.  And, I realized that even in the main event of the World Series of Poker, there are a lot of bad players playing.  For now, that includes me.  But next time, it will be different.