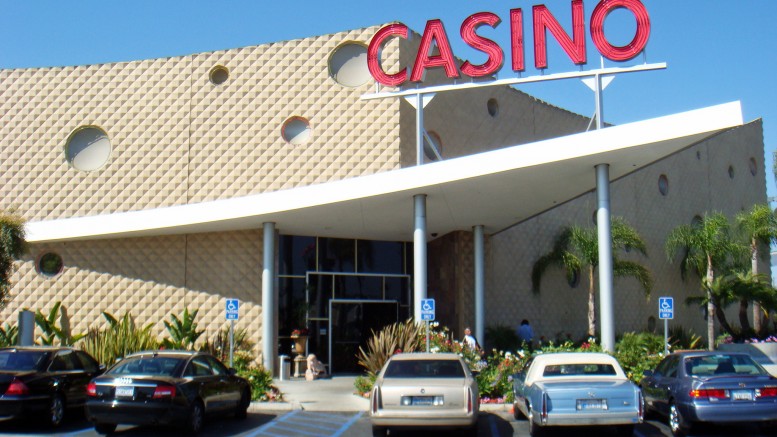 Lately, I’ve been dry with my tournaments. I can’t even win a satellite to the tournament.

Soon after, a spot opens up for me at the $300-$500 table and I move over. When I get there, I see that there’s a lady with about $4,500 in $5 chips. WTF?! I asked the guy next to me what’s going on and he tells me that she’s been super lucky hitting everything and everybody at the table is paying her off.

I watch her play for a while to see what she’s doing. It was obvious that she was a novice player that played ABC poker and just have been super lucky. She was very obvious about her hands and didn’t really try to hide her strong hands at all, and when she was weak, she would make faces and noise. I also saw that she would call you down with any pair. She just didn’t like getting bluffed off her hand. Once, when I was raising pre-flop with a good hand, she said, “Whatever you bet, I’m gonna call you.” I was originally going to bet $30, but when she said that, I decided to push it to $50 and sure enough she called me. After the flop, she just check folded and I made a little more than I would have.

The problem with playing against a non-bluffable player is that you have to wait for a hand. And sometimes, you just never get one.

Fortunately for me on this night, I woke up with pocket queens, raised, and got called by her and another guy. The flop was Q-10-10. A great flop but it’s hard to get any action when you flop this big. The guy on my right was first to act and he comes out betting $150. Huh? Is he just trying to steal or does he really have something? Since the lady was to my left, I just flat call, and she flat calls.

At this point, I’m a little confused as to what she has. There are 2 diamonds but she is not the type of player to call with a draw. The turn is an ace. I’m hoping somebody has an ace and it makes them stronger. The guy bets out $250. I pretend to think, then call. Now the lady makes a lot of noise and calls. At this point, I’m putting the guy on a 10. I still don’t know what she has.

The river is a King. The flush doesn’t come. The guy checks now. Maybe he’s scared of the 4 card straight on the board. I go all-in for about $300. The lady stands up and makes a bunch of noise then calls. Then the guy goes all-in for $800 for another $500 on top of my bet. Hmmm. Now, I’m hoping he doesn’t have pocket 10s.

Soon after this hand, I get pocket Kings and raise and the same 2 people call me. This time, the flop is A-K-J rainbow. Even though I flopped a set, I’m not super happy about this flop. The guy checks, I bet $150, the lady folds, and the guy calls.

The turn is a Jack. Nice. Now I feel a lot better about my hand. The guy checks again. This time, I bet $250 and he calls.

The river is a blank. I’m hoping he made something, but he checks. At this point, I don’t think I can get much more from this guy so I make a big $500 bet to make it look like a bluff. He thinks for a while and calls and I take down another huge pot. He claimed to have flopped a straight but he didn’t show.

After that, I call it a night feeling pretty good. I didn’t make any tricky plays but it’s always nice to get paid off with your big hands.

Be the first to comment on "Big Hands Pay Off"